After several years of writing a column called “Camping with Cliff” for Road Rider Magazine, the idea occurred to Cliff that a club comprised of people who liked to ride and camp with motorcycles might be just the ticket. This was in 1973. After consulting with several Road Rider staff members and others, the idea was put into motion… and the Brotherhood of Motorcycle Campers was born.  The abbreviation was written as BoM/cC to distinguish it from the many governmental agencies using all capital letters. The M/c stood for motorcycle, a popular abbreviation.

The original membership was made up of thirty honorary people who were active in motorcycle circles. This got the club off the ground. Included in the list were several Road Rider staff members, as well as Bill Harmer, founder of the BMW Riders of America club and George Spidell, one of the founders of the Retreads, and its president. Other pioneers in several phases of motorcycle development, such as Ez Berg, Dean Wixom, and George Hays, were included.

I served as President and Chief Cook & Bottle Washer, as well as writer and publisher of our Quarterly Report, forerunner of The Campfire Ring. An advisory group of seven, called the Board of Directors, was appointed. An annual meeting was held at a campground in the west, which happened to be the first of the many campouts now scheduled throughout the land. The meeting was generally given over to getting acquainted and to discussing any new ideas or suggestions for improving the club. 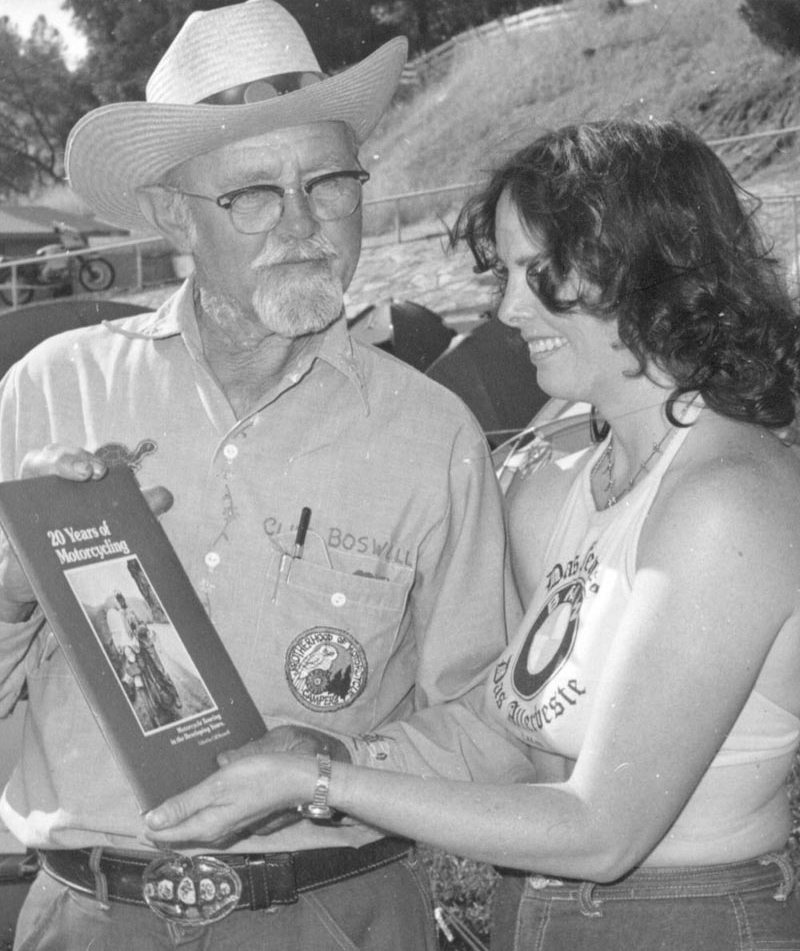 Our emblem, consisting of an Arctic snowy owl on a motorcycle wheel with a camping scene in the background, was first drawn by Bill Cole, a high school art teacher, and modified by my daughter, Ellen Anderson. The old symbol was taken from a story called “The White Rider,” which I wrote for Motorcyclist Magazine. New members receive a copy of this story as part of their original package when joining.

Members paid yearly dues of one dollar (later raised to three). They also furnished five large self-addressed stamped envelopes in which their copies of the Quarterly Report, and once a year membership roster were mailed. As membership grew, the envelope collection and bookkeeping problems multiplied. The solution eventually was to go the computer route as initiated by Don and Glenna Stansifer after they took over the handlebars.

In 1975, several motorcycle groups were discovering the advantages of incorporating with a non-profit status. So the BoM/cC decided to try it, too, with the help of Russ Sanford, state lobbyist for motorcycle rights in California. However, the book work and the organization became so ponderous that it was impossible to operate without an expanded staff, and the corporation was dissolved in two years. To illustrate: we had several officers, a complicated set of by-laws, a board of directors and twenty voting members, with the latter selected from various parts of the United States. Phil Spooner, the Ol’ Desert Fox, was our first and only official president. Upon dissolution, our assets were converted to cash and were donated to the M.O.R.E. Foundation, a non-profit corporation designed to benefit motorcycle riders.

Final dissolution of the incorporated status was made at an annual campout meeting in December 1977. To say the least, we as a group had fallen into disrepair, and we were looking for a way out.

Our bacon was saved when Bill and Betty Poteet, who had sponsored the annual campout and who had served on our board of directors, volunteered to take over the group and return it to its original status with no frills attached. Steve Kimball, then with Road Rider Magazine, and later with Cycle World, took over the editorship of the Quarterly Report. 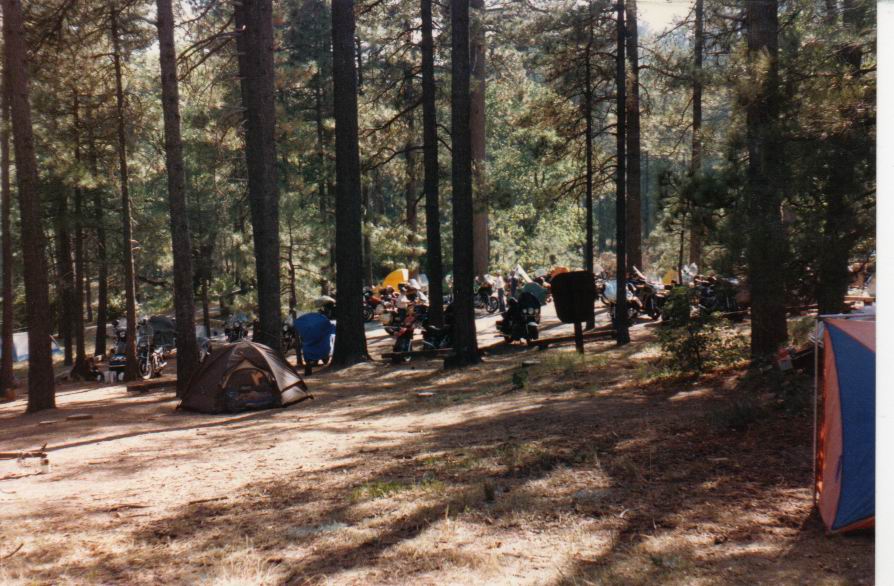 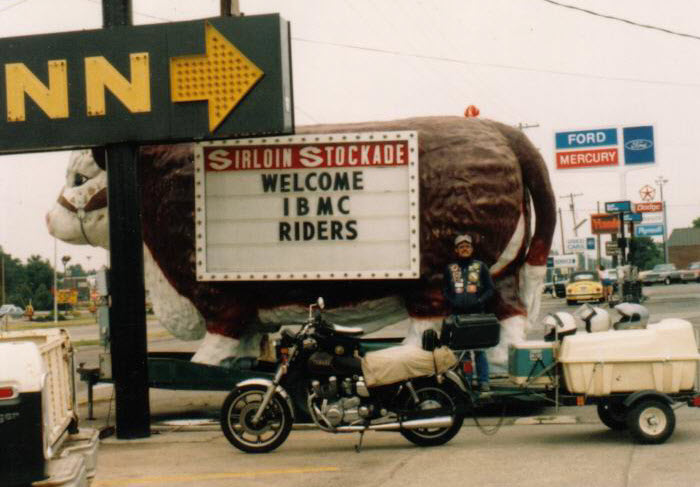 Bill and Betty kept the club going for four years, with membership reaching close to 400. The emphasis then was mainly on correspondence among members, with the development of friendships and the distribution of information through the Quarterly Report and among members, about camping facilities in parts of the country through which a member might be traveling. Members were encouraged to have information on hand about local camping facilities. They were also invited to indicate whether or not they could furnish camping space for travelers. A small tent symbol was placed in front of the names of those with such space available.

Since the beginning of the Brotherhood, members have been encouraged to schedule informal campouts at various points, or rather, at any place convenient throughout the USA and Canada. At first, the effort was toward planning for campsites near some of the large national activities such as the Indianapolis 500, or the Aspencade Convention in New Mexico. Under the leadership of Don and Glenna, campouts have become the most binding activity of the club. 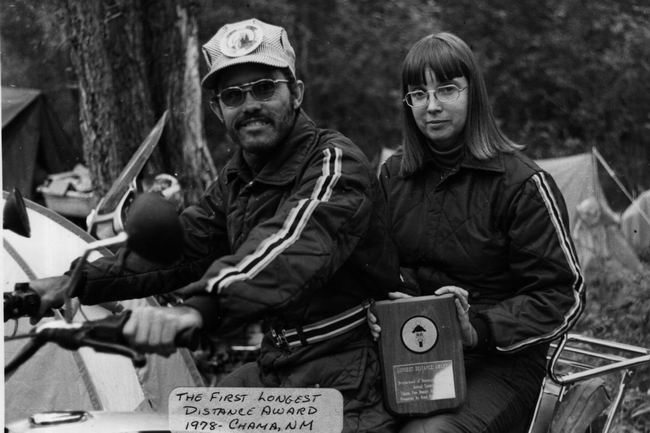 The IBMC emblem has undergone several revisions since its inception. The first one, designed by Ellen Anderson, was followed by another by Jack Pearson, Los Angeles architect. The latest one was designed by Don Stansifer specifically for the T-shirts, and is slightly different from that on the sticker and patch.

A three-foot banner with the patch design painted in full color was presented to the club by its maker, Ev Erwin of El Paso, TX, at our annual meeting in Ruidoso. This banner is still in the hands of the directors, but is too toil-worn for further display. A second banner rendition of the emblem in beautiful needle-punch technique was made by Barbara Billington, and was presented to me. It has been displayed at many campouts in the west and at the national campout in Texas in 1988. Ray Koerzendorfer’s wife Luana made a banner with the latest logo, and this one graces campouts now.

The BoM/cC designation of the Brotherhood was modified to IBMC by Don and Glenna Stansifer, in order to reflect the international aspects of the club, and to reassure the growing number of motorcycling women that the club is indeed for “sisters” as well as “brothers.” 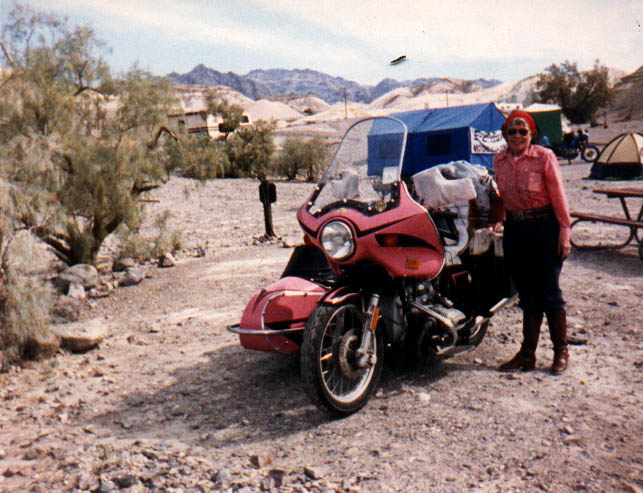 Don and Glenna took over the operation of the club as director and newsletter editor in September 1981. Their efforts over the following ten years resulted in an expanded membership to over 1200, with a broad participation in campouts throughout the nation. They also expanded the Quarterly Report, which they renamed The Campfire Ring, into a bimonthly publication. The club was operating on an even firmer foundation than ever and remained as one of the few groups committed to the enjoyment of camping as a healthful and useful activity for the motorcyclist, whether in a group or traveling independently.

In 1991, deciding that 10 years was long enough for anyone to be in charge of the membership list and newsletter publication, Ruben & Joan Guerra were prevailed upon to pick up the torch. After 3 years, Joan’s health necessitated another changeover, and Mark Rosenthal & Judith Rogow took over as directors. 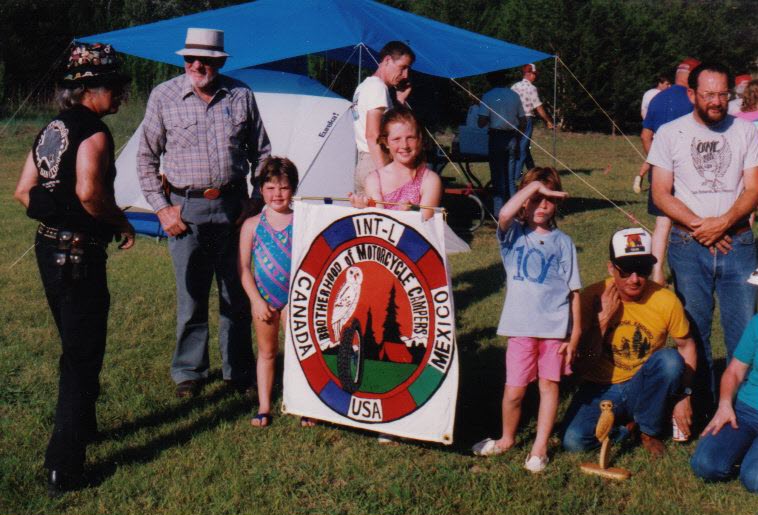 Farokh Irani made sure in the early days of computer technology that the IBMC name was preserved for Internet use. Michelle Goldsmith & Linda Horr, came on board early in 2000, and with the assistance of Holly Hughes keeping the camp store and Glenna Stansifer as webmaster. After Linda’s untimely death in 2002, Jim Wilson took on the Campfire Ring editing duties while Michelle continued on as director. Around this time Craig Rabin volunteered to put on the web the many photos of members and campouts in virtual web-based albums while Michelle became the keeper of the hard copy photo albums. In 2006 Holly Hughes turned the store over to Michelle. Gordon Roberts took over as webmaster when Glenna retired. Today, Michelle, Jim, Gordon, Craig and Farokh are continuing the unbroken line of dedicated volunteers who make the continuance of the IBMC possible.

Through all these changes, one thing has remained constant: Cliff’s original idea of the lone biker communing with the outdoors in his cozy campsite, has always been the goal. Bikes and campsites change, but our ideal has continued to be to experience the outdoors in all ways. From our mode of transportation, to our choice of accommodations, we are living out of doors. In a world increasingly dominated by concrete, steel and glass, we keep our sense of perspective by getting up close and personal with wind, bugs, grass and trees. 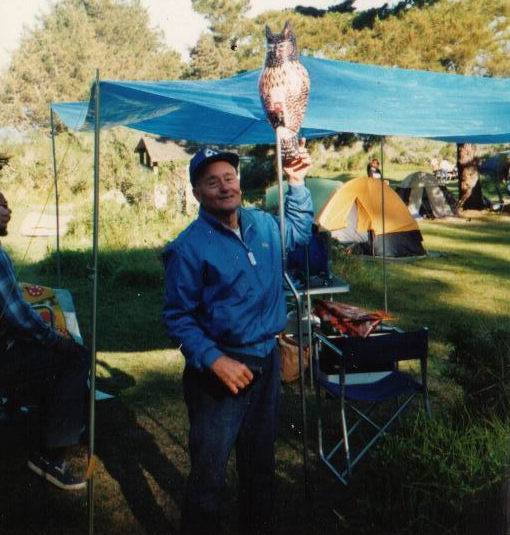